The world has been divided not only in the name of nation but also in the name of religion. Messengers of various faiths have been Preached the unity of mankind but the message was eventually lost when religion took control of man. Baha’ullah who founded the Baha’i faith, brought about a major change in the thought process of the people across the globe. he believed in unity and that was this message as well. Baha’i faith is a world religion that has its own laws, sacred writings, and holy day and like every other religion its own calendar. However it has no clergy and the administration at various levels is handled by elected assemblies. Some of the major principles of Baha’i faith include unity , abolition of discrimination of all sorts, compulsory education for all and striking harmony between science and religious truth.

Baha’ullah from Persia founded Baha’i faith over a hundred and fifty years ago. Baha’i temples are constructed in various parts of the world. They represent the essence of the faith, as visitors from all religions are welcome here to meditate . The temples offer serene atmosphere and each of these temples are uniquely designed sharing some common features. Every Baha’i temple has a central dome and nine entrances, which suggest that people from various directions gather at a common place to meditate and reflect without and inter-mediation in the form of clergy, sermons and rituals.There are seven Baha’i temples , referred to as Baha’i houses of worship, in seven continents of the world.

Chile in south America houses the eighth construction, which is underway. The seven places where Baha’i temples are located are North America, Australia, Uganda, Germany, Panama, Samoa and India.

The cornerstone for Baha’i temple in North America was laid in the year 1912 and the construction was completed in the year1953. The stunning architecture of the temple amidst gorgeous gardens has earned it a place among the Seven Wonders of Illinois. Fountain Hall, which is the temple’s oldest part and Cornerstone Room are located in the lower level. The temple is the oldest and the largest of the Baha’i temples in the world. The intricate designs on the walls of the auditorium are awe-inspiring. 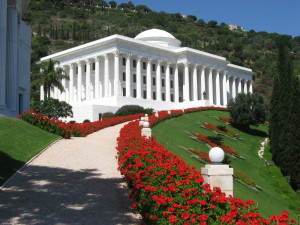 The Baha’i House of Worship, Australia

Located near the northern beaches of Sydney, the Baha’i temple looks stunningly gorgeous. Spread over an area of 9 hectares, the temple and the lush gardens have become one of the most frequented sites in Australia ever since it was constructed in the year 1961. The dome rises 38 meters above the floor. The gardens surrounding the temple contain unique and native plants

The Baha’i House of Worship, Uganda

The Baha’i Temple in Uganda was built in the year 1962. It took four years to complete the construction, which began in the year 1958. Situated at Kikaaya Hill on the outskirts of Kampala, the temple, like every Baha’i temple, has unique style. The green color dome is made of mosaic tiles acquired from Italy and the tiles in the lower roof are acquired from Belgium. The glass windows add beauty to the interior with its green, white, blue and amber colors. As the nine doors open, you are captivated by the stunning interior that resembles the fields and the skies on a sunny day.