For two nations that have had such a storied past, Great Britain and France do make a natural travel pair for anyone looking for a vacation. Located fairly close together and separated by a relatively thin strip of water, anyone looking to travel to Great Britain and not take in France (and vice-versa) is missing out on a great experience in a convenient location. They compliment each other fabulously but each is different in their own way.

For any first time travellers who lack a basic understanding of French, Great Britain is the obvious place to situate yourself, as English is the most common second language in the world. Because of this, you won’t have a hard time finding people in France who can communicate to you in English if you decide to take a quick pop-over to see a few of the more famous sights. With this in mind, Great Britain may be perceived as too safe for people looking to experience something truly different, so situating themselves in France may be higher on their to-do list. This is a mistake of many travellers – skipping the places that speak the same language as them, assuming all is the same. Don’t fall into this trap – Britain is a great destination for everyone.

If you are planning a trip to Britain or France, consider these methods of travel to reach the other – all offer something different and best of all, all are reasonably affordable. 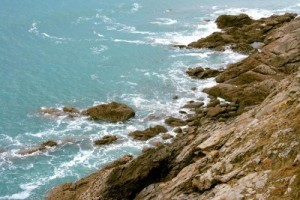 A great choice often overlooked by travellers in a hurry, taking a ferry across the English Channel offers you a chance to relax and unwind while you travel between countries. If you’re departing from the UK, there are Brittany Ferries that will get you to northwestern France from many different ports and allow you to experience the French countryside in all its quaint glory.

Yes – you can reach Britain from France by road. It’s kind of cheating, but taking the Chunnel under the English Channel is the fastest way to go between nations without spending too much money (provided you have a vehicle). It’s a different experience, for sure, but it allows quick trips from London to Paris to be possible and is particularly handy if one country is cheaper to fly out of to get back home than the other.

Particularly if you’re accustomed to the expensive and lengthy flights in the giant countries of Canada, the U.S. or Australia, flying between France and Great Britain is relatively quick and cheap depending on who you fly with. You can get flights from smaller airports like Stansted on board RyanAir for a few pounds depending on your luggage needs, making flying the surprising option of choice for people in a hurry to get to Marseille who don’t want to spend too much.