Skip to Content
Home Travel Blog The Samos Young Artists Festival: An Experience Not to be Missed

Chewy Leave a Comment on The Samos Young Artists Festival: An Experience Not to be Missed

Staying on the Island of Samos while the Samos Young Artists Festival is in full swing is an experience not to be missed. The island itself is a stunning example of a Greek paradise, with a mountainous interior surrounded by 160 km of a coastline full of little fishing villages, natural harbours and great beaches. 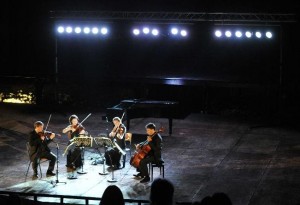 Every August the island plays host to the Samos Young Artist’s Festival, inviting talented young international artists to perform in concert. This year’s motto was “Music flows across the sea,” a reference to the stunning views of the port city of Phythagorian and the sea beyond from the concert site. This year’s artistic director of the festival, the Greek composer and conductor, Konstantina Gourzi, sought to fuse classical music and improvisation into one giant melting pot of excellent music.

All I can say is, she definitely achieved her aim. The festival ran from the 6th to the 12th of August. All the concerts were held in an ancient theatre in Pythagorian, which was built in the 4th century B.C. With 1000 seats, I was lucky enough to get a seat every night, where I enjoyed a combination of the fascinating music and amazing views. There were musicians from all the corners of the world with New York, Great Britain, Germany, Israel and Turkey being just a few of the countries represented by their young musicians at the festival.

One of the standout performances for me was the Istanbul Wind Ensemble with their performance of a medley of classical music called “Chamber music breezes from a brotherly country.” They played a beautiful piece by Gioacchino Rossini: Il Barbiere die Siviglia.

In saying that, the last night was probably the best night of the whole festival. All the musicians banded together to play improvisations of selected Greek folk songs. It was amazing to see all the different musicians with such different styles, coming together to pay homage to the Greek heritage of the festival. 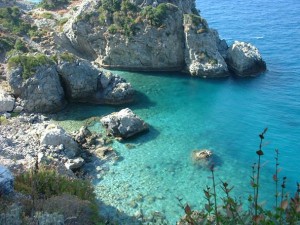 I took the opportunity to sample some of the islands natural beauty spots in the mornings as the concerts started every evening. There was plenty to do and see, with gorgeous beaches for those particularly lazy mornings. On my more energetic days, I went on some great hikes that took you right through the mountains, with spectacular views to be seen along the way. For those who would prefer gentler walks, there were many to choose from, with trails winding among the olive groves and vineyards lower down the mountain slopes. All in all, I had an amazing time during the Samos Young Artist Festival, it was the perfect combination of Greek culture, international music and the beauty of the island of Samos. I’ve even booked my flight for next year!

This post was written by Carley, who first experienced the Greek Island of Samos last year and is already planning her return! When she’s not raving about the cultural experiences of the Greek Islands, she can also be found writing for the Sunvil Blog.