Skip to Content
Home Europe A city guide to Lisbon

Chewy Leave a Comment on A city guide to Lisbon

The capital city of Portugal probably doesn’t get the same recognition as other destinations of its ilk, such as Rome, Barcelona or Paris, but nonetheless it contains plenty of attractions that would appeal to tourists.

Situated on the westernmost coast of Europe, the metropolis is home to more than 2.8 million people and is one of the oldest cities in the world. It enjoys average temperatures in the low teens during the winter months, rising to the mid-20s in the summer, so you will never be too hot or cold when strolling around the streets.

Take a look through our rough guide and see whether a cheap Portugal holiday appeals to you and click here to find the best deals.

The official tongue of the capital is, of course, Portuguese, which is the sixth most spoken language in the world. It is derived from Latin, which was brought to the Iberian peninsula by Roman settlers but as Portugal was not earmarked as a particularly important territory, its language was not subjected to the same lexical changes as the dialect spoken by the urbane population of Rome.

However, Portuguese became an international language during the Age of Discovery, when explorers, traders and merchants began dealing with Asia, Africa, and the Americas.

These days, most people who live and work in the main tourist destinations will speak English, although you can enhance your holiday experience by dropping in a few Portuguese words and phrases, such as obrigado  (‘thank you’), com licença  (‘excuse me’) and bom dia (‘good morning’). Do not attempt to speak Spanish as the people of Portugal are very proud of their own language. 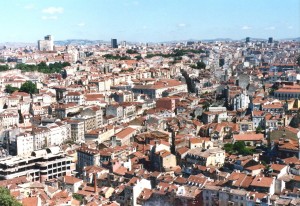 With so much to see and do in the capital, the hardest part is knowing where to start. A guided tour could therefore be the perfect way to fit in as many tourist hotspots as possible, as well as get a sense of the layout of Lisbon. But there is no need to hop on a regular tour bus – the city has many alternative ways in which to explore its different areas, so try out a GoCar GPS Guided Tour in a three-wheeler, which involves you driving around the city on pre-programmed routes listening to the audio commentary. You can take the tour at your own pace, giving you a chance to soak up the atmosphere.

There is also a Segway tour that takes visitors to the most historic parts of the city and will see you speeding up hills you might not have tackled on foot. Perhaps better suited to couples than families, this quirky mode of transportation will put a smile on your face as you whizz around the cathedral, the National Pantheon and the 16th century Casa dos Bicos.

If you prefer not to do any of the driving, check out the Lisbon River Cruise tour. This two-hour journey down the Tagus River gives a completely different perspective of the capital and is incredibly relaxing.

If it’s a quick snack you’re after, try out the delights of Pasteis de Belem in Rua de Belem. Sample the lightest pastries in the traditional tiled tearoom, which was founded in 1837.

Stroll over to Colares Velho in Largo Dr Carlos França for an evening meal in the vine-covered courtyard, which retains the heat of the sun long after sunset, and sip on one of the restaurant’s full-bodied reds.