Alicante is a city that’s made for walking. Its beautiful Old Quarter, stunning buildings and golden stretches of sand all need to be explored on foot to be fully appreciated. There are plenty of walking tours you can go on to discover what it’s all about.

Of course, this does not mean there’s no need to get a rental vehicle from Alicante Airport. I was impressed to learn that Benidorm is just a 30-minute drive up the coast. So, not only can you check out what this famous family resort is all about, but you can also visit theme parks like Aqualandia and Terra Mitica. 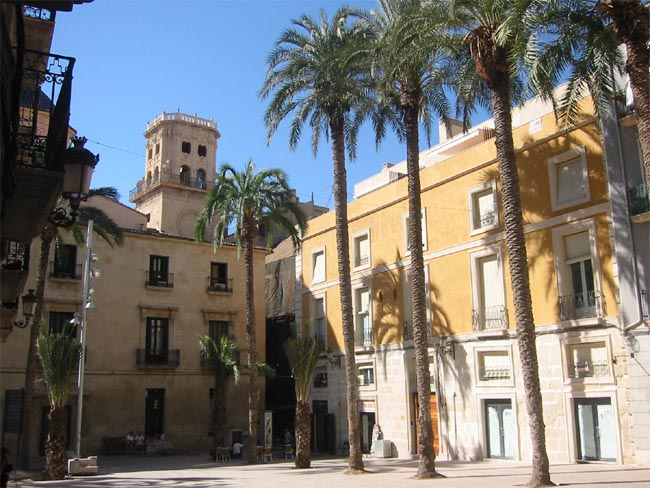 Before you hop into your car for a daytrip, make sure you explore everything Alicante has to offer. Below are some of the walking tours I think are the best to go on.

The walls of Alicante
Did you know that until the 19th century, the city actually had walls going around it? They were knocked down by request of Queen Isabel II, after she visited Alicante in 1858 and decided the walls were restricting its growth. As such, the tour of the walls will allow you to explore the new parts of the city that sprung up during the second half of the century following the queen’s orders.

There is a load to see during this walk, such as the Teatro Principal. This theatre was built around the middle of the 19th century during a period when lots of similar construction projects were going on. Plaza Gabriel Miro will also be on your walking itinerary and is a square with a lovely fountain in the middle. You’ll also see the Rambla, a dry riverbed that only carries water if it rains enough.

The Old Quarter
This is one of the most popular places in Alicante and I can certainly see why, as it boasts some of the top cultural and historical sites you will find in the city. Two of the leading religious ones are the Concatedral de San Nicolas and the Basilica de Santa Maria.

The co-cathedral (a cathedral church which acts as the local bishop’s seat along with another) is actually one of the few buildings in the Old Quarter that was not destroyed during an attack in 1691, which saw 90 per cent of Alicante ruined.

Don’t forget to also go into the Basilica de Santa Maria, as it’s tempting to spend all of your time gazing at its stunning facade! Like the co-cathedral, it too avoided being completely blown to pieces, although you can see cannon marks on the outside where the city’s walls came under attack.

Museums
Another city walking tour I think you should give a try if you have the time is of Alicante’s many museums. A good starting point is the Santa Barbara castle, where you’ll find the Alicante City Museum. You can learn all about the Islamic past of the Spanish destination before it converted to Christianity, and even further back to prehistoric times.

The Contemporary Art Museum might also be on your list of things to do and you will find it in the Plaza de Santa Maria, which is handy if you also want to visit the basilica. The collection spans the 20th century and includes pieces from the likes of Dali and Picasso.

There are lots more walking tours I could mention. If you’ve been to Alicante, list your favourite ones below.