The first two games I detailed (in what started out as a one-time post but is quickly turning into an ongoing series) are great for anyone and make great introduction games that can be played casually with new found travel acquaintances. After all, who doesn’t love to get sloshed with new best friends? These games can be loud, raucous and won’t lead to anyone getting seriously hurt.

The next group of games won’t so much get you hurt as they will get you really messed up depending on how you play. Some cultures really make drinking a part of their lifestyle and certain drinks hit people differently, so playing these games are a great way to see how other drinkers from around the world stack up to you and your own. I have played all of these games while travelling, some of them were taught to me while others I introduced to my fellow travellers – regardless of which, it made for a great time.

As always, you don’t need to get drunk to be awesome while travelling, but every now and then it’s worth it to cut loose and get sauced. What better way than with drinking games? 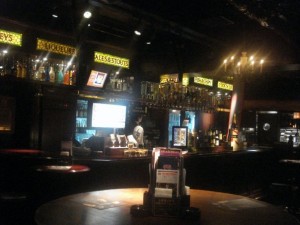 To play: a deck of cards and lots and lots to drink. Plus one cup *shudder*

The cards all have different rules from assigning drinks to people to only girls doing something to telling secrets to… well it can get ridiculous. The key is to sip your drink to avoid tapping out way too early. The name of the game comes from the King cards, as each person draws a card that is face down and does what the card means (look it up or create your own rules), but the Kings mean you pour a ‘drink’ worth of your beverage into the cup, until the last King drawn means you drink whatever is in the cup. Now you know why I shuddered.

No explanation necessary, this was messy. People were drinking white Russians, beer, bloody mary’s and some foul terrible other things…. And yeah… guess who drew the final king? Why yours truly, of course. 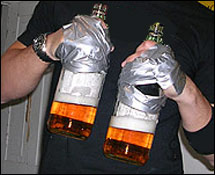 Edward 40-Hands (Also in Japan, but at a house party)

To play: two 40oz bottles of malt liquor per person and duct tape

Simply put – this is a great way to get mangled and the rules are super duper simple. You duct tape the bottles to your hands and aren’t allowed to take them off until both bottles are empty – not even to urinate. What this means is you have to get other people to thelp you get your pants off if you need to relieve yourself, or chug your drink as hard as you can – which can make you either throw up or make the liquor pass through you faster. It’s a great game for everyone, but ladies – unless you have a giant bladder, maybe sit this one out.

You could do this with almost any kind of alcohol as long as it was about 600-700 ml each (a regular size beer bottle is too easy). Malt liquor tends to be a little more challenging because of the gross taste and alcohol content, but beer is certainly an option. I love playing this game with a good group of friends on a ‘low key’ night, as it’s inexpensive and thoroughly entertaining, which makes it great for the budget traveller who still wants to part on occasion.