When I was a much younger lad, I remember playing a number of enjoyable games and getting quite messed while doing so. Then I got a little older and thought I didn’t need games to drink. Little did I know that once I got older than that and moved past whatever douchery possessed me to say something so foolish, I would rediscover these enjoyable drinking games while travelling and wondered how I could ever have been that lame.

No, you don’t need to drink to have a good time but if you have just met some cool people and are in the right venue, playing drinking games can be the perfect recipe for making great memories (and maybe even a few… mistakes) and even better friends. Everyone loves a good game and particularly if you’re with people who have never played the game before, it’s your chance to introduce them to a little piece of your home and help international relations everywhere.

Here are some of my experiences playing these games while travelling. 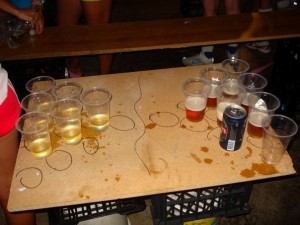 In teams of two, arrange in a pyramid on either side and in teams of two try to sink the balls into the opposing side’s cups (1/3 full of some alcohol) by taking turns shooting. Not the most hygienic, but a ton of fun for all.

I did this when I was in Australia and a student, so you know it’s going to be a good time right there. We did it tournament style, with many games going on at once, costumes, music and a healthy helping of sexy times. As was true with many of these good times, the local law enforcement showed up and shut it down. Needless to say, we were all winners. 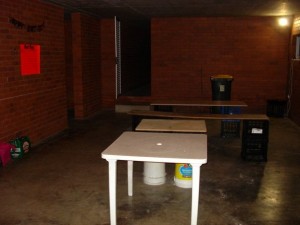 To play: 4-10 plastic cups full of beer and an equal number of thirsty partiers.

In two teams lined up along a table, race to chug your beers before the other team can an then set the cup down on the edge of the table and flip your cup upside down – only when completed is the next person on your team able to start. Odd number of people or someone feeling like a champ? Have them go first and then also last. Great way to get really messed up with minimal skill required aside from loose throat muscles (wa wa).

I was visiting a buddy in Switzerland while he was in school and we all decided to play this one night as a way of getting to know each other. With a bunch of Canadians, Americans, Brits, Germans, Swedes and Swiss tossing back brews and getting a bit crazy, you can bet it was a night to remember. A few people couldn’t hold their freshly downed beers, (namely one guy who I won’t mention who thought he was manly enough to be the anchor… okay it was me), but that only added to the magic of the night.