Chewy 2 Comments on Top Ten Party Festivals in the World 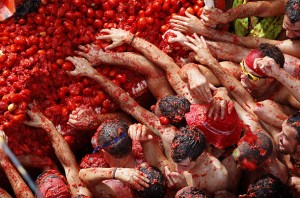 One of the most unforgettable events in the world is The Full Moon Party. Although this is celebrated a few places in Asia, it is best known as a Thailand tradition that occurs on every full moon. Over fifty thousand people throng on the Thailand island of Kho Pha Ngan to celebrate the full moon on the beach. Revelers at this event partake in the local but lethal alcohol, buckets. Music played here includes the hottest RnB tracks of the day as well as reggae, house, drum and bass and trance tunes. The party lasts all night on the beach. Partiers can get here easily due to the affordable flights to Phuket.

The Song Kran is another festivity that is held in Thailand. The event is held on every April 13th marking a new year for the Thailand citizens. The festivity can last for even a week in places such as Chiang Mai and it mostly involves pouring or throwing water at each other. This event has attracted many Western tourists to Thailand.

The Burning Man festival attracts over fifty thousand attendees from all over the world. Tons of men, women and children come to the Black Rock Desert which is located in Nevada, USA, to see the forty foot high structures being set alight (hence its name). The festival is usually held the weekend before Labour Day celebrations in September. Every year has a different theme. In addition to this, the event encourages any artists to come and showcase their art at the open playa in the event.

Running of the Bulls is another festivity that attracts global attention. The event takes place in Pamplona, Spain, every July. The participants in the event attempt to outrun the bulls that chase them throughout the streets of Spain. Onlookers are at a safe distance to cheer them on. The bulls chase participants from the pens to the bullring. Here, experienced matadors fight the bulls. Millions of people can watch the event worldwide at the comfort of their homes through television sets.

Another famous festivity from Spain is the La Tomatina. This event is based in a small town known as Bunol located near Valencia, Spain. The streets of the town are filled with thousands of people who pelt crushed tomatoes at each other. The tomatoes are crushed in order to avoid any damage or people getting injured while enjoying the festivity. The participants have the capacity to use over one hundred and fifty thousand tomatoes during the festival. This event usually lasts an hour and there is a lot of singing and dancing among other activities during this festivity.

Lastly, Oktoberfest is among the most favourite event globally. Although it is celebrated in all parts of the world, about five million tourists arrive in Germany to partake in chicken, pork and millions of liters of beer every year. The beer is provided for by various breweries such as Augustiner.